This package is coded in R.

It allows you to load a variable from one or more experiments together with the reference data at the corresponding dates for validation where the reference data can be any observational dataset or reanalysis or several of them. Once loaded the experimental and reference data are organised into two matrices with similar structures that can be used as input arguments to the other functions to compute anomalies, climatologies, any prediction score and finally plot or animate the results.

Slides about R, its popularty and tricks for performance, from CES training talks on 2015/05/19: pdf ppt

Also you can check the slides used in the s2dverification meetings:

This package has two system dependencies, CDO and R (>= 2.14.1), apart from the R packages ncdf4, GEOmap, geomapdata, maps, mapproj, abind, parallel and bigmemory but these are installed automatically with

The link to the GIT repository is https://earth.bsc.es/gitlab/es/s2dverification.git

The coordinator of this project is Nicolau Manubens Gil nicolau.manubens@bsc.es

As a new user, please register to the mailing list by sending an e-mail with the subject 'subscribe' to the following address, if you are interested in keeping abreast of latest news or internal discussions:

To use the R s2dverification functions, open an R session and load the package with the command

or, if you want to avoid collision of s2dverification function names with function names of other R packages in use in your session, with the command

If you use the second option, you must call the functions in the package as s2dverification::FunctionName() instead of FunctionName()

After the package is loaded, you can check information of a function with the command

You'll see a quick description of the aim of the function, the input arguments, the output variables and contact references in case of questions.

To learn how to use these functions you can start by giving a look at the examples in the documentation pages of each function. For more advanced examples of usage you can run the scripts under the directory 'doc' of the s2dverification package ('inst/doc' in the raw GIT repository). Few arguments need to be specified as explained in the headers inside:

If you want to use an old version or a version still in development of the s2dverification, download the repository folder to your computer and check-out to the branch that contains the version you want to use.

Install the package locally with the command

Then you can load the library in R with the command

and it will be ready to use.

In the 's2dverification' project main folder you can see a few files that fulfil the standard R package structure. These files are called the source files. The structure is as follows:

- Folder 'R': Contains .R files with the code of the functions in the package, one function per file. The name of the file must be the same as the function it contains ending with '.R'.

- Folder 'inst': Contains documentation files, images, etc. that will be provided to the user after the installation of the package. Be careful with the weight of the files, they should be as light as possible. For example, the folder 'inst/doc' contains demo scripts that show how to use the package. When the user installs the package, they will be able to check the scripts in the folder '/path/to/package/doc'. This folder also contains the folder 'config' which contains two s2dverification configuration files, one used at IC3 and which is loaded by default, and a sample configuration file.

- File 'DESCRIPTION': Contains general information about the package, dependencies, authorship, etc. and is looked up automatically in the package build stage.

Using GitLab and according to the GIT branching and testing strategy introduced in 2014/11, every time you want to perform a new development, you must follow the steps in the image, explained in detail below. 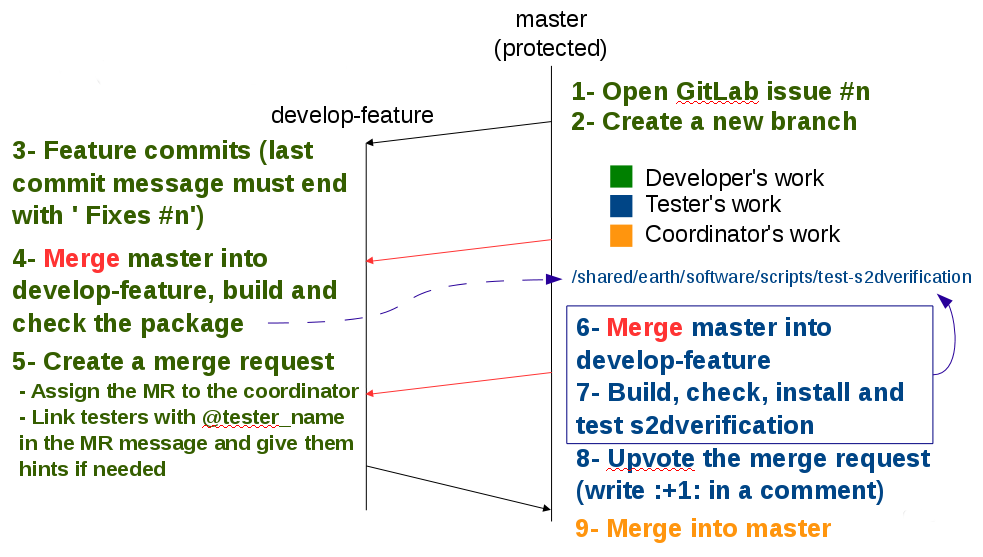 2- Create a branch from 'master'

4- Check that everything is fine

8- When the tests are performed and passed approve the MR with an approval comment (write :+1: in a message in the MR discussion)

Steps to build and check a package manually

You can place the commands above in your .bashrc file if you develop in this package frequently.

Check that the tarball is installable with the command

If you wish, for tidy purposes, you can run the two previous commands in the project main folder. The tarball and the .Rcheck folder will be generated there breaking the package structure, but will be ignored when you push the changes to the repository.

If you wish, you can enable the execution of the example code removing the parameter '–no-examples':

The example execution takes a long time, but it is run at least before every release to CRAN.

Optionally you can start R and load the installation of the package in the 's2dverification.Rcheck' repository with the command

and check that the modified functionalities work properly again.

Steps to add a new function to a package

Each function in the folder 'R' has a corresponding .Rd file in the 'man' folder, and the text in the .Rd will be used to generate the user manual and will appear when you type ?FunctionName.

New Functionalities needed by the CFUers

Version numbers will be bumped as described in the Semantic Versioning conventions. See http://semver.org.

1- Check all open issues to see if some can be solved easily before releasing.

5- Close all MRs possible. For each:

6- Run test script. Then run manually R CMD check without parameter –-no-examples and with parameter -–as-cran if releasing on CRAN. Try to include in test scripts all bugs detected since last release.

8- Open upgrade branch and open MR and merge as in 4-. Update at least:

12- Build and install in /cfu/software, and in amdahl and in moore for each module possible.

13- Send release e-mail to s2dverification list, with all news since previous release.

You can check the style guide for the s2dverification package here

*This release is also available on CRAN

This presentation given at the SPECS general assembly 2014, summarize the organization of the package, the main functions, some examples and the main lines of development. pdf

The following tutorial given at the SPECS general assembly 2014 shows the basic feature of s2dverification. All the examples are done with the data included in the package on CRAN, so it can be done outside of IC3. All the example are corrected.

The second tutorial is an extract of the tutorial done to learn how to use s2dverification for the ICTP-WRCP extreme event summer school. It is longer and more complete than the first one, and it uses the ENSEMBLES seasonal forecast, hence it cannot be done outside of the IC3.

Not programmed in R

*: Supported on any platform that has an interpreter of the specified programming language